Plasmas, the fourth state-of-matter, are collections of freely moving charged particles(mainly electrons and ions) in which collective phenomena, such as wave, dominate the behavior of the system. Atoms have lost electrons, energy is needed to strip electrons from atoms to make plasma. The energy can be of various origins: thermal, electrical, or light (ultraviolet light or intense visible light from a laser). Plasma are essential to many high-technology applications, one example is fusion energy for which the fuel is high-temperature plasma. Low-temperature plasma are used for a growing number of materials fabrication processes including the etching of complex patterns for micro-electronic and micro-optical components and the deposition of tribological, magnetic, microwave generation, destruction of toxic wastes, chemical synthesis, lasers, ion thrusters, and advanced design accelerators for fundamental particle research.

Plasma is by far the most common form of matter. Plasma in the stars and in the tenuous space between them makes up over 99% of the visible universe and perhaps most of that which is not visible. On earth we live upon an island of "ordinary" matter. The different states of matter generally found on earth are solid, liquid, and gas.

We have learned to work, play, and rest using these familiar states of matter. Sir William Crookes, an English physicist, identified a fourth state of matter, now called plasma, in 1879. Plasma temperature and densities range from relatively cool and tenuous (aurora borealis) to very hot and dense (the central core of a star). Ordinary solids, liquids, and gases are both electrically neutral and too cool or dense to be in a plasma state. The word "PLASMA" first applied to ionized gas by Dr. Irving Langmuir, an American chemist and physicist, in 1929. 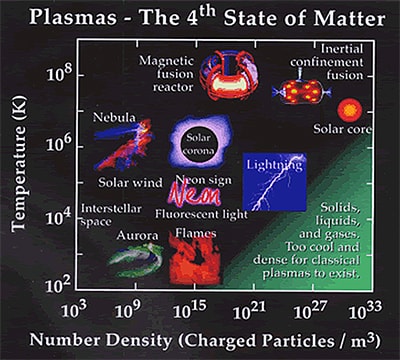 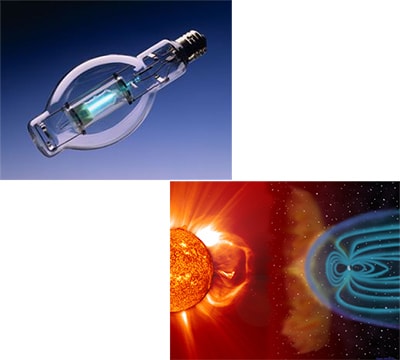